BROOKLYN, N.Y., Jan. 22, 2019 (SEND2PRESS NEWSWIRE) — From an initial field of thousands of girls and young women from all over the East Coast, some 226 top point-scorers in divisions from elementary school-through-college-and-beyond, have earned their way to the finals of the 45th Anniversary Colgate Women’s Games (Jan. 20, 2019 – Pratt Institute). Persevering through four preliminary meets and a semi-final, athletes in every age division have emerged as some of the country’s finest athletic talent, with many scoring their personal best of this indoor season at the nation’s largest track and field series for women. 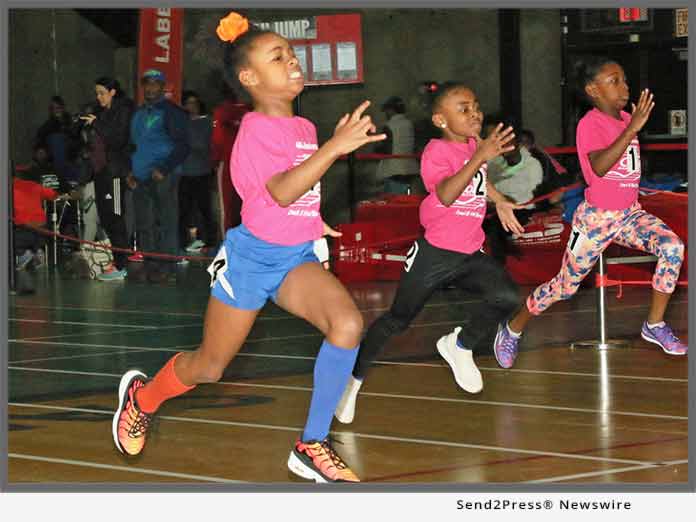 Saturday’s semi-finals at Pratt Institute in Brooklyn saw fierce competition as top contenders in every division left it all on the track in their race to the finals.

In the Elementary A Division: Khloe Khan of Brooklyn’s PS 107 heads to the finals undefeated, finishing first in the 55 meters in 8.88. In the 200 meters, Maya Wyche of Philips Academy Charter School in Newark, NJ crossed the tape in 32.50 in a photo finish with Jocelyn Marie Germain of Roslyn Elementary, Roslyn, PA, who finished second in 32.73. Jocelyn still leads Maya by just one point (50-49) headed to the Armory finals. In the 400 meters, Karly Datilus of KIPP Thrive Academy in Newark, NJ took first place with a personal record performance of 1:15.86, an upset win over Philadelphia’s Lauren Broadus of Charles W. Henry School, who finished third in 1:17.71, after Savannah Bonhomme of The Bridges Academy in West Islip, NY, who placed second in 1:16.35. In the 800 meters, Aisha Wajid of Grand Concourse Academy in the Bronx remains in first place after her win 2:43.92. In the high jump, Amora Johnson of Community School 21 in Brooklyn cleared the bar at 3’6” and now leads Faizah Salami of Community Partner Charter School in Queens by four points.

In the Elementary B Division: In the 55 meters, sprint sensation and last year’s Colgate Women’s Games Finals’ champion Amirah Nesmith of St. Helena Incarnation of Philadelphia, had a perfect undefeated season after placing first in 7.92. In the 55-meter hurdles, Kiara Davis of Wilbur Elementary in Bear, DE also enjoyed an undefeated season, placing first in 9.90. Davis also set a division High Jump record this season when she cleared 4’9.25” at the third preliminary meet. In the 200 meters, Jayleciah Wilson of PS 121 in the Bronx won in 28.70. In the 400 meters, Julia Grant of Stroudsburg MS in PA, placed first with her fastest performance of the series; 1:02.26. In the 800 meters, last year’s undefeated finals’ champion Da’mira Allen of Chichester MS in Boothwyn, PA, returns to the finals in first place, after her win in 2:25.52. In the High Jump, Ebony Turner of Timothy Christian School in Piscataway, NJ cleared 4’4” for the win. 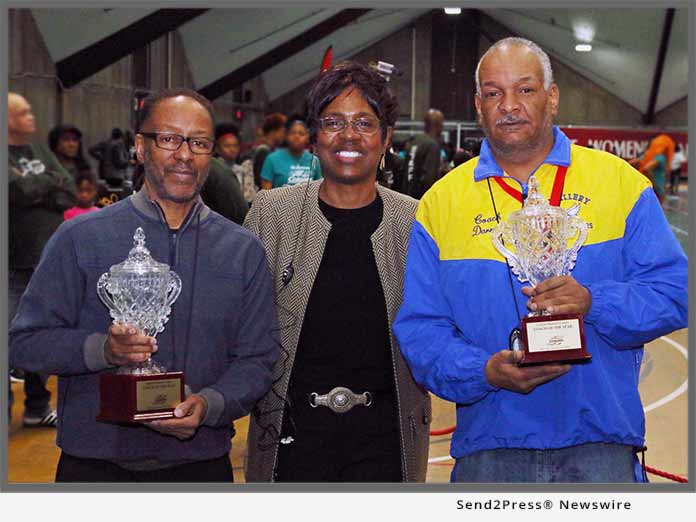 In the Mid School Division: Mahaya Jones of Belmont Charter in Philadelphia placed first in 7:58 in the 55 meters. In the 55-meter hurdles, Taleea Buxton of Young Scholars CS in Philadelphia placed first in 8.38. Tai Sheppard of Brooklyn’s Community Partnership Charter School placed second in 8.54. The pair has been trading wins all series, separated by only 5 points with Buxton ahead leading into the finals. In the 200 meters, three time Colgate Women’s Games record-holder and Junior Olympic champion Avery Lewis of West Town School in West Chester, PA, placed first in 25.50, capping off another perfect season, undefeated in both sprint events through the series. In the 400 meters, Eyota Bey of Cedarbrook Middle School in Philadelphia placed first in 59.47. In the 800 meters, Maameyaa Myinah of Woodbridge, NJ won in 2:24.87. In another photo finish, rare for a 1500-meter race, Juliette Salazar of Peekskill Middle School placed first in 4:45.69, with Rainn Sheppard of Community Partnership Charter School in Brooklyn crossing second in 4:58.76. Sheppard has improved every meet through the series, finishing with her best performance on Saturday. Rowan Houston of Rye Country Day School, Rye, NY finished undefeated in the High Jump, clearing 5’0” for the win, In the Shot Put, Jada McCown of Hooker MSin New Haven, CT tossed 9.32M, her season’s best for the win.

In the High School Division: In the 55 meters, Michel Parker of Promise Academy in Manhattan crossed the tape in 7.39; an upset victory over first place Rori Lowe of Christopher Columbus Campus Pelham Prep in the Bronx, who came in second in 7.45. With the win, Parker moves into a 3rd place tie headed to the finals. In the 55 meter hurdles, Anjoli Mathews of Brookline High School in MA, took first place in 8.38, her best race of the season, ahead of Peyton Rollins of Buckingham Browne & Nichols School in Cambridge, MS who placed second, and Phoebe Myers of Young Women’s Leadership School in Queens, NY who placed third in 8.50. Headed to the finals as one of the most competitive events, it’s Myers, Mathew and Rollins from first through third place. In the 200 meters, Brianna White of Bishop Loughlin in Brooklyn, placed first in 25.65; and Maya Cheatham of Young Women’s Leadership School in Queens surprised with a second place finish in 26.62, by finishing ahead of second place Brianna Brown of Collegiate Institute of Math and Science in the Bronx, who finished third in 26.72.

College / Open and 30’s Plus division results are available at https://www.colgategames.com/.

Meet Director Cheryl Toussaint thanked all of this year’s participants, coaches and parents, and reflected upon how the goals of the long-running, much celebrated series have remained true for 45 years. “The Colgate Women’s Games provides a healthy means for young people to challenge themselves in an atmosphere of friendly competition; empowering them with self-esteem that will last a lifetime,” she said.

“To all coaches, parents and friends, thank you for your commitment to get to Pratt through all types of weather, some from great distances throughout the series. Each of you makes a tremendous contribution toward a more positive future for those you encourage and support. We hope you have enjoyed every minute of your experience,” she said.

The Games’ goal is also about the importance of continued education. All finalists in grade divisions must submit their attendance records, and an essay to the meet director to be eligible to compete. The essay topic appears at https://www.colgategames.com/.

The Colgate Women’s Games boast more than 26 Olympic alumnae, hundreds of Junior Olympians and age-division national champions, and countless changed lives. Each year, high school participants are among the most heavily recruited athletes by colleges and universities across the nation. Coaches, recruiters, athletes and fans can follow scores each week at https://www.colgategames.com/.

The finals of the 45th anniversary Colgate Women’s Games will take place on Saturday, February 2, 2019 at the Armory, NYC. Tickets to the Armory finals are free by request at: https://www.eventbrite.com/e/45th-anniversary-colgate-womens-games-finals-at-the-armory-track-nyc-tickets-39450263801

###IMAGES FOR MEDIA:[1] Send2Press.com/300dpi/19-0122s2p-cwg45-coachawards-300dpi.jpgCaption: (L to R) John Alston of Club 44 in Brooklyn, Meet Director Cheryl Toussaint, and Darryl Murphy of the Mallery Challengers Track Club in Philadelphia. Alston and Murphy were both honored as “Coach of the Year” for their long-time support of women’s track and field and the Colgate Women’s Games.

[2] Send2Press.com/300dpi/19-0122s2p-jan20semifinals-2019-300dpi.jpgCaption: Saturday’s semi-finals at Pratt Institute in Brooklyn saw fierce competition as top contenders in every division left it all on the track in their race to the finals.